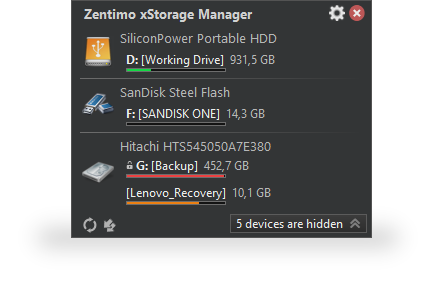 Unlike native safe removal tool's menu it shows you device drive sizes and empty space, device icons, lets you customize anything, and gives much more abilities at your fingertips: you can stop or browse drives in a click, quickly launch portable applications, speed test your drives, scan for hardware changes, stop all devices at once and many more.
Stopping via "disabling" for SATA drives 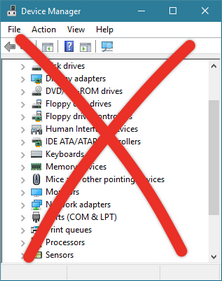 Some kinds of external devices (e.g. SATA drives from Silicon Image), are true hot-plug devices. However, their drivers do not support the "safe removal" function. Such devices are not displayed in the native safe removal tool and can be stopped only via disabling in the Device Manager. It is a tiresome way, because it requires many actions to do, moreover you must enable the device manually after you connect it next time.

Not only does Zentimo allow you to stop such devices, it also detects automatically what devices must be "safely removed" and which devices must be "disabled." Also, the program enables the "disabled" device automatically on its next connection, thus it makes working with the device absolutely the same as with a usual device.
Keyboard shortcuts for stopping\returning

Like to do everything using the keyboard? Now you can stop and view devices with only ONE hotkey! No need to remember keyboard shortcuts for each device. Being in any application, press the key combination (Win+S by default) and you will see the stop menu. Use the Up\Down Arrow keys to select the device you need and either press Enter to stop it or Ctrl B to view the contents of a device disk. Also you can assign a dedicated hotkey to stop a certain device or even all devices at once.
Return stopped device back 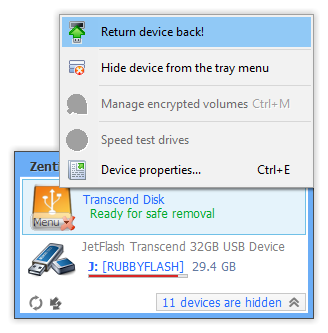 After you had stopped the device, but still did not unplug it, sometimes it is quite useful to return it back into the system. For example if you remembered that you forgot to write a file to the external drive. In order to do it, you have to physically reconnect the device, however sometimes it's quite inconvenient to do, e.g. if the device is connected to the rear panel of the computer.
Display processes preventing device from being stopped

Ever encountered the situation when Windows does not allow you to remove a device? Unlike Windows, Zentimo will show you the programs which prevent the device from being stopped and let you close these programs or just the files they opened on the device.
Forced device stopping

Even if there are opened programs on the device Zentimo can still forcedly stop the device by wisely unlocking file processes and by unloading the programs launched from the drive.
Ejecting memory cards rather than the card reader

If you had safely removed a card reader, you would need to physically reconnect it in order to make it work with cards again (or to use "Return device back" feature of the program). In the case of two or more memory cards connected to the card reader at the same time, they all become unavailable in the system after you stop the card reader. Zentimo lets you eject memory cards one-by-one. Moreover, if the memory card was locked by any processes, the program would display these "locking" processes as well as it does on failure to stop a whole device.
Support of USB, SATA, Firewire devices

Zentimo supports all kinds of hotplug devices. If it does not display the device you need, try enabling the "Display all storage devices" checkbox in the program options.
Power off the drives on stopping

When you stop the device Windows 10 leaves USB ports powered on. This causes the flash drive continue lighting and the hard drive continue spinning. All modern hard drives park theirs heads automatically when you unplug them so in theory this behavior shouldn’t lead to data looses or drive damages. But in practice the hard drive usually sound strangely when you unplug them on run and this makes a hard drive owner being a bit nervous when he hears that. USB Safely Remove can change this behavior and allow you to power off the device on its stopping.
Automate Your Work!
Program autorun on device insertion\stopping 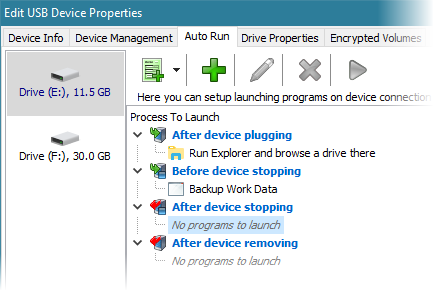 Another Zentimo's feature that distinguishes it from similar software is ability to start any applications not only after connecting a device, but also before its removal. The autorun feature allows you to set up data backup before disconnecting a removable hard drive, run Total Commander with the contents of the pen-drive, automatically unmount an encrypted TrueCrypt drive before disconnecting the USB media, etc.
Command line to safe removal

Zentimo has a powerful and convenient command line: usr.exe. It allows you to automate work with devices. For example, you can automatically stop devices according to schedule or in case of any other event or reactivate them back to the system.
Drive Letter Management
Hiding drives of empty card reader slots 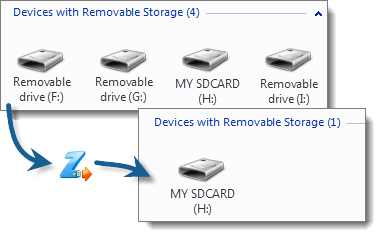 Fixing a drive letter to a specific device 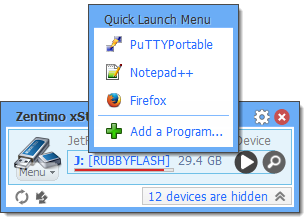 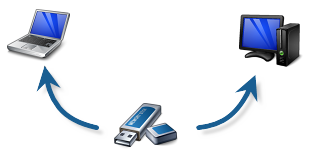 You can set up your device name, image or app quick launch list once and these settings will be available on the other computers where Zentimo is installed
More security & information
Encrypted Volumes Management 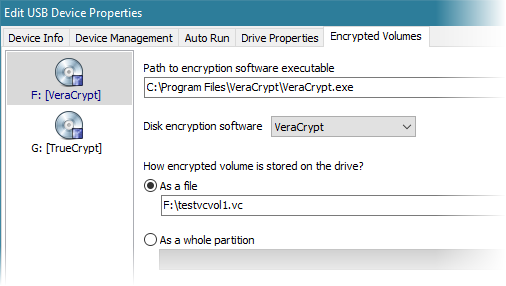 The program has deep integration with encryption software such as TrueCrypt, VeraCrypt and CipherShed. Your encrypted containers that are stored on external drives can be handled like a part of the device: you can see them on the device menu, they can be automatically mounted\dismounted on device connection\disconnection and even if a program prevents encrypted volume from being stopped Zentimo allows you to see and unlock such programs.
Honest drive speed test

Most other drive speed testers measure only the read\write speed of large files, displaying a theoretical drive speed. This is not related to real-life speed as we often write plenty of small files to external drives.

Our investigations shows that some flash drives have worse performance than other ones on writing of small files however their top performance at writing large files are the same. Therefore we added to Zentimo a performance measurement tool that allows to display you real performance of your drive.